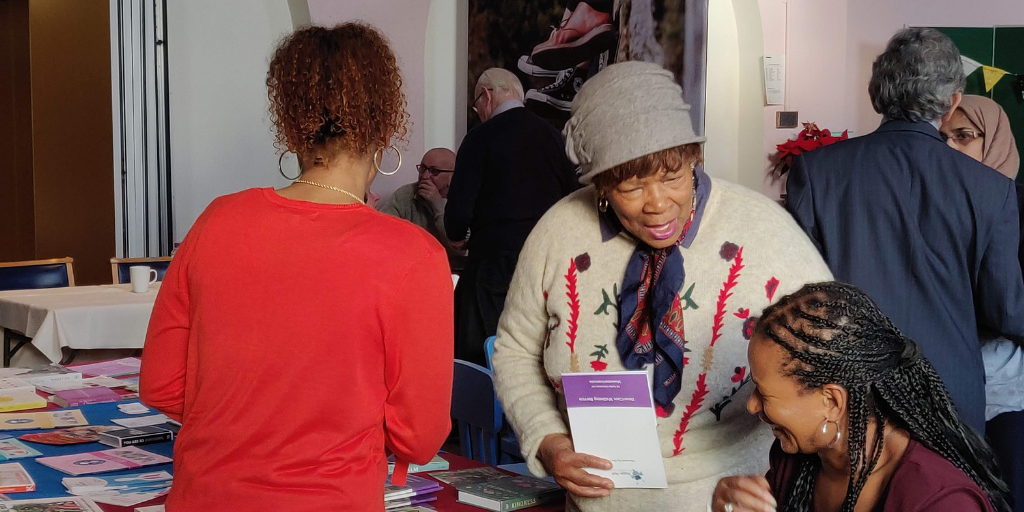 Sylvia has a passion for growing food and, as it turns out, a desire to share it. We first met her in April 2018 when she came along to a community event in Kings Heath and took a keen interest in the nutrition conversations. She grew up in the Carribean where she learned about the health benefits of the indigenous herbs and plants from her grandma, Martha.

They’re more than plants to me – they’re my life

Two years ago Sylvia lost her eldest daughter, Maxine, following a sudden and brief illness. Maxine had inherited her mother’s passion for homegrown food. She called to say she wasn’t feeling well and less than 24 hours later she was gone.

You get the impression that Sylvia’s sustained devotion is somehow connected to her daughter’s memory. She wouldn’t let us leave before seeing her photo album. Lingering over a picture of a young smiling woman, she sighs. Not a single day goes by when I don’t think of her .. we used to do everything together.

To Grow is to Move

Sylvia had invited us to her house to see her garden. She wanted to show how much could be done with a small plot, a handful of pots, and a smidgen of patience. Her home life is a manifestation of her love for horticulture, food and family. Even though she lives alone, she is far from being lonely. Hearing the way she talks about Maxine, there is no denying a sense of grief for a departed loved one, but she somehow exudes more gratitude than she does sorrow.

It’s the end of the growing season and Sylvia has already started to plant up for next year. A small room between the kitchen and garden which serves as her pantry is packed full with this season’s harvest. There are onions, garlic, various varieties of potatoes, pumpkins and peppers. Sylvia, through her connection to food and nature, is a person who moves. She is alert and energetic as she talks about her harvest, casually throwing in tips about how best to preserve or prepare them. Through the winter I’ll make my stew-peas soup with these, she says, pointing to the bowl of red peas on the table.

Having joined our network 18 months ago, Sylvia is today working to package her passion so others can benefit from her experience. I don’t know why anyone would be interested in listening to anything I have to say. I’m just an ordinary woman, she says. with a coy smile.

In truth, there is nothing ordinary about Sylvia. It’s not what she says that impresses – it’s who she is. Sylvia exemplifies the best possible outcome for a person on a wellbeing journey. She was recommended by her doctor through a social prescription. Now she is sharing her knowledge, skills and experience with others who might also benefit. She is a member turned maker and very much savouring the process.

Sylvia personifies a tradition that has its roots (forgive the pun) in the Carribean and African philosophical ideas of ubuntu. Ubuntu translates roughly as “humanity” or “mutual wellbeing”. The knowledge she embodies is ancient and deep and through the diaspora has travelled far and wide over the centuries.

In Birmingham today, with its richly-layered diversity, there is a renaissance of sorts taking place. A growing number within our communities who prioritise health and wellbeing are connecting and finding new ways to express the values they cherish. Sylvia’s story reminds us that credo accumulates through the generations. It can’t be rushed. Like growing strawberries from seed, it’s a slow process.

Later this month, Sylvia plans to record a podcast and meet up with other socially-minded members in the network to explore ideas about food and nutrition. On the lunch menu at the next event? Spiced pumpkin soup with herb croutons; and green bean, beetroot and capsicum salad – all courtesy of Sylvia’s pantry. There’s something about being heard that makes the world feel a tad smaller.