The world-wide Maker movement has become a well-established phenomenon over the past decades. Few would deny that hands-on creativity is a good thing. The visceral process of making stuff is powerful energy that affects us and those around us in equal measure. Our most recent prototype (delivered over 18 months in Kings Heath, Birmingham UK) has highlighted the role of a new and unique element of supply chain economics. We call them Neomakers.

Neomakers are the manifestation of technology (and skills) applied at a level of granularity not yet sustained in even the most advanced supply chains. Now anyone, anywhere with a suitable device is able to make all sorts of digital transactions for what you might call “micro-services”. So what differentiates the transaction from one made in a retail store, restaurants and such like?  If there is a calculable difference, it stems from to an apparently simple question: Are we net consumers or net producers in the 21st-century economy? 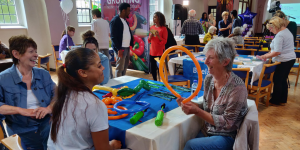 Naomi the Neomaker in Action

We have written before about the new phenomenon of individuals; self-organised / informal groups and community businesses that in addition to creating great products and services also have a shared goal. That goal is to promote the wellbeing of their customers and supply chain partners. If you’re thinking “what’s a supply chain”? This blog is definitely for you! In fact, for these groups, the nurturing, fostering and sharing of wellbeing is their raison d’etre.

We are not talking about big corporates and their CSR programmes here. Nor the huge, industrialised charity sector. Those structures will continue to co-exist with these new economic units, and that is part of a story yet to be told. We’re really talking about something quite different: small scale, flexible, community focussed, real people in real places. And yet Neomakers work on a scale that creates value (and social capital) on a level comparable to any multinational or corporate.  How is this possible?

As it happens, Neomakers live smack-bang in the intersection between public services and communities. Which means, with diminishing capacity in public service provision, they may well be making a unique (if incalculable) contribution to the economy locally,  nationally and increasingly internationally. We say “incalculable” but that is about to change. Why? Technology of course.

More often than not they are using digital technologies to power their activities and create an impact on a scale which belies their size and structure. It could be as simple as using a social media page to share news about an event, or perhaps market and sell their ideas or product. On the other end of the spectrum, they are organising themselves and networking to high levels of sophistication with the aid of “freemium” online collaboration tools; business management software and CRM systems.

At the same time, the direction of travel of public service policy and provision has necessarily shifted more towards prevention and personalised care. Ushered along, no doubt, by the same winds of change that are driving the Neomaker revolution. This scenario represents an unprecedented era of opportunity for innovation and disruption in the social sector.

A very interesting question arises from all this. What if these Neomakers are creating real value and fostering increased wellbeing within communities? That would make them a de facto component of an emerging supply chain model that may well be the key to sustainable future public service provision? So what exactly is a Neomaker?

People often ask, “what is with you system designers and your labels and jargon?” We say, call it whatever you want but let’s have a conversation because the Neomakers are a “thing” in a world is changing fast and irrevocably.

We’ve been partnering with several Neomakers during the past 18 months to test the design of a social prescribing model called Happy Hub. As we’ve already mentioned the activity was focused in Kings Heath, Birmingham. Enter Naomi Spencer. She has just celebrated 10 years in business with her socially-minded event management company.

Naomi’s journey began in 2009 when she organised a party for her 2-year-old son,AJ, and was badly let down by the hired party planners. She was disappointed, and thought, know what? Next time I’ll do it myself. In no time she was also catering for the parties and celebrations of friends and families.

We first met Naomi over a coffee when we were looking for partners to help us run a series of wellbeing workshops as part of the Happy Hub social prescribing prototype. We were looking for people who understood a very special requirement that was critical to the design of the model: how to create a “pop up” space that says “you are unique and valuable. In here, you can grow.”

For me it’s all about creating value and honing my craft, my passion

What happened next is critical to the prototype. Listening to the offer, Naomi said, that’s precisely what I do. That is why I set up my business in the first place. Then she told us, I really get what you’re trying to do and I’ll contribute in any way I can. We learned from Naomi that space making, when done well, shows people they are valued and that there are no short cuts in creating environments that makes people feel at ease.

A final thought on the term “supply chain”: not to be thought of so much of the movement of goods but more a complex network of human interactions. In the 21st century, supply chains have become the means through which we create wellbeing; bringing together raw materials to build trust; confidence; empathy; and growth.