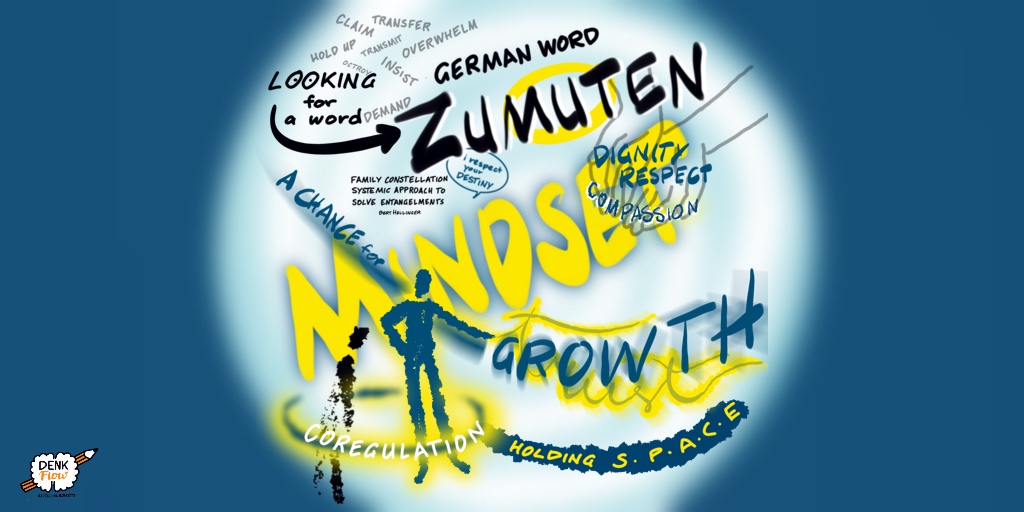 A Good Place to Start

The German language has a singular word which speaks to the idea of implicit trust in a person’s ability to learn and flourish. The word is “zumuten” which in effect means nurturing potential with dignity and respect. It is the capacity to acknowledge the growth pains and the fears a person is dealing with, without jumping in to take over. Thereby, respecting their ability to grow through the painful yet joyful journey of self-discovery while holding the space around them with compassion.

To do so confers faith in their ability to learn and at the same time nurtures their potential. Whereas, doing the work for them only serves to diminish their capacity for development. It also suggests that either you do not appreciate the effort they’re making or, worse, you think you can do it better. Even with the best of intentions, you end up infantilising the person and placing your own needs above theirs.

Ongoing interaction with a traumatized person means dealing with a very particular dynamic. Inevitably, at some point, a fuse will blow and their conditioned defence mechanisms kick in. This trigger event is often imperceptible. A traumatized person experiences a sense of disconnectedness which if sustained over time makes them feel deeply unsafe within their own body. This in turns leads to maladaptive behaviours that compromise cognitive ability, psychology and health. As well as a tendency to engage in dysfunctional relationships or disengage completely from intimacy.

For the uninformed, it is not always easy to spot a traumatized person. Many are high functioning and can appear amazingly well-adapted to the environments they find themselves in. However, they almost certainly will be in denial and deploying all kinds of coping mechanisms to solve this tension of feeling unsafe while navigating a world they perceive viscerally as a threat. Traumatised or not, when we are over-focused on threats we’re less likely to see the attendant possibilities to resolve or circumvent them.

There is a strong relationship between behavioural economics, nudge theory and zumuten in terms of the collective impact of our personal choices. Additionally, information overload has created a new “muddled-middle” and it would seem the most effective way to navigate it is to learn to ask the 21st-century questions, not those of the previous one. Problems are rarely solved by applying the same mindset that created them in the first place.

“Where the hell are the good guys?“

An emerging reality of the current pandemic is that the opportunity cost is beyond the measure of conventional economic models. To even begin to get a sense of the magnitude, organisations especially public service providers should be trauma-informed in order to understand whether their outputs are contributing to the big picture or just putting out fires in isolated corners of the system. Coronavirus shows us we can no longer take for granted which of these is the case.

Another angle from which to unpick this is to see the “muddled-middle” as the domain where 20th-century economic powerhouses have caused the most harm by using sophisticated messaging techniques to nudge collective behaviours in their favour (AKA advertising). In the 21st-century the “muddled-middle” has evolved to become impenetrably complex, giving rise to even more dubious and arcane techniques the results of which are nothing short of catastrophic. Small wonder we as a society are increasingly traumatised.

Maybe we have been looking through the wrong end of the telescope? When a traumatised person is ready to receive help, through such questions they will start making sense of the “muddled-middle” from their own unique point of view and intuitively connect with fellow travellers. This coming together of uniquely authentic perspectives is the point where social healing begins.

“My view of human nature is that all of us are just holding it together in various ways — and that’s okay, and we just need to go easy with one another, knowing that we’re all these incredibly fragile beings.”

In the 20th century, collective maladaptive behaviours created excess demand on healthcare services (mental health; smoking; drinking; over-eating; drug addiction; domestic violence). In the 21st century, it is the collectively crafted grassroots solutions that will prevail to address the wicked issues of our times. Therefore we need to think more seriously about what non-medical (i.e early or preventative) solutions could best help an increasingly traumatised society.

Now that the drug dealers, crooks and pimps have digitised and gone online you can, if it floats your boat, order off the dark-web and get “near-instant” delivery of all manner of illegal artefacts. If you think about it, that’s better performance than Amazon and Uber Eats! So another interesting 21st-century question when it comes to creating and delivering value online could be, “where the hell are the good guys?”